Driver’s power windows could be operated by the scanner. So, it rules out windows motor, footwell module, and power/ground/ to those components.

First, I tested for a good power and ground at the driver’s switch connector. All present.

Then I decided to check the LIN Bus

Here is a diagram for Power Windows, and Power Mirrors circuits. 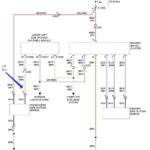 Turns out that the power mirrors have two options, with and without a heating element, which makes a big difference in the wiring.

When I disconnected the passenger power mirror, problem disappeared.

Hi Friend, can you share what part number you used that has LIN bus on the mirror?
We are trying to buy a mirror which has LIN bus instead of direct motor signal.

Alternativelly, do you know what is the internal wiring between the Mirror motor connector (8 pins) (round component) and the external mirror connector (6 pins)?